A flat, horizontal cloth, regardless of the destination (thick plaster,
cement dosing for traffic or for laying floors, etc.), cannot be built with the eye. You need a tight design and a correct construction. That is why they must be made of reference points and lines on which to base themselves in order to achieve the desired results.

In the particular case of floor foldersare traditionally built by belt, level, from the same material (concrete) on which the rules that will give the final face slide. This method is described here.

One way to speed up the time, when working with strips of material, is to speed up the process of setting the cement. This can be done by adding plaster to the mixture or by making it with fast-setting cement. However, it is necessary to have these materials on site and it also involves a higher cost. And it doesn’t always guarantee that the belt gets strong enough to be worn during the day.

Therefore this method can be used to replace the strips of material with light pipes, level and well glued, which can be used practically immediately after laying. And it should be so that they can be removed on that day as well, so that they are available for reuse in the next work.

The procedure of building a folder using light pipes

Obviously we’ll have to start with define the floor level, which will give us the level of file correspondent. It is very useful to represent the level of the finished floor (Npt) as a continuous line on the walls around the environment in which you work. This is shown in Figure 1.

However, sometimes it is enough to mark the finished level of the floor, NPT, only in the corners of the room and in the middle of the section if the room was longer, as shown in figure 2. 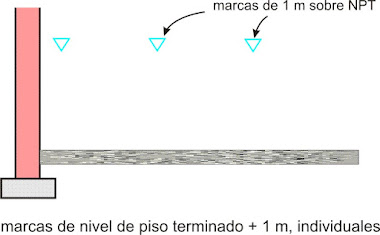 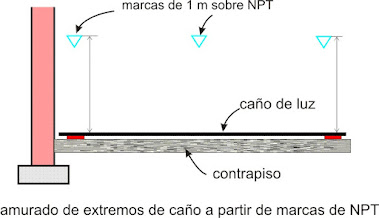 You can check the level of light pipes on the middle sign and also secure it with the material, as shown in figure 4. 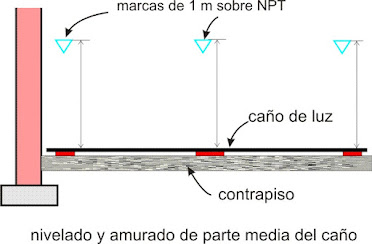 Once you have done this, all that remains is to fill in the entire bottom space from the pipe with material so that no section remains in the air and without support, as seen in figure 5. 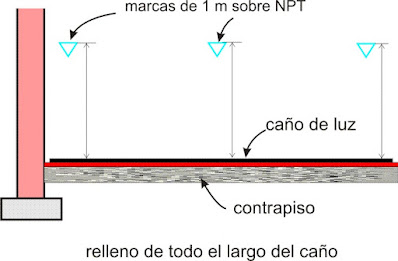 To the other how the weight and movement of the ruler could cause drain it bends and falls, generating a depression in the level cement dosing. At the same time, I could move and get down light pipe forcing them to start leveling work again.

Once this preparation has guide pipes proceed in the usual way, filling in the spaces between of light, cutting with a metal ruler (or good wood and which is very straight). And to the extent that file go «pulling», this begins to strengthen, you can fill any area that could have been lowered; and finish the job by smoothing with a wooden trowel. If file designed to be acceptable, it can be finished with a metal trowel, powdering the surface with powdered cement, to generate a more wear-resistant surface layer.

You may be interested in: cement folders for laying floors